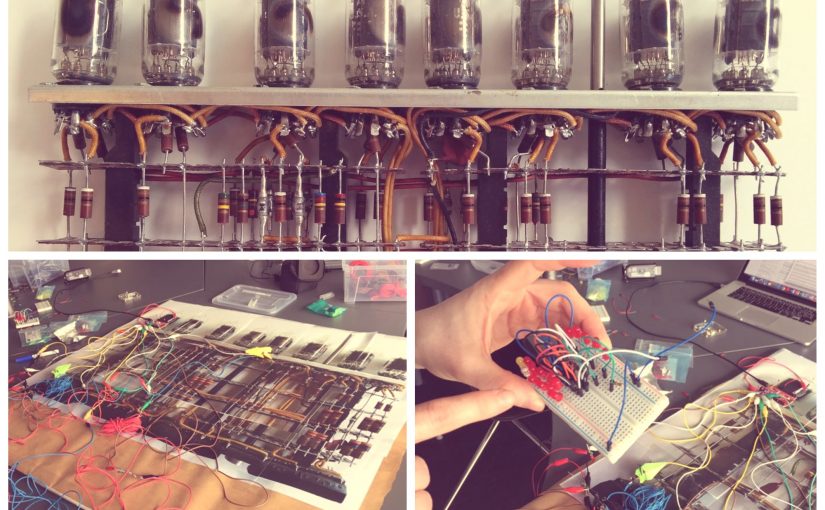 GRACE is an interactive Origami installation and App, created by FemTech.dk, which celebrate the 70th anniversary since the first bug was found in a computer by famous female computer scientist Grace Murray Hopper. GRACE combines history with making and technology as a way to reach and engage heterogeneous groups of people in technology design and will be introduced to the public at Copenhagen Makers Faire 2017.Concretely, the GRACE installation is a 120*240 cm representation of an old electromechanical computer with vacuum tubes. Participants then create and add physical origami bugs to the electromechanical computer, by attaching these to micro-controllers which can go online. The micro-controllers can then turn-on/off different types of actuators (servo motors and LEDs), by participants playing an online mobile game, which they download on their smart devices.

On 9 September 1947, computer scientist Grace Murray Hopper recorded the first computer bug in her log book, as she worked on the Harvard Mark II. During Copenhagen Maker 2017, FemTech.dk will celebrate the 70th anniversary of this “first actual case of bug being found” through a fun, inclusive, and educational installation.The installation consists of a large image of an old electromechanical computer and physical origami bugs, which can be removed using a mobile game. This installation will be co-created by people participating in Copenhagen Maker Fair, who will be invited to create origami bugs and enhance these with actuators controlled by a microcontroller.

Copenhagen Maker is the largest maker fair in Copenhagen. This year, the fair will be held on 8-10 September 2017 in Carlsberg Byen. It’s organised in the context of the Techfestival, where more than 15000 people are invited to explore and discuss the impact of technology on our lives. FemTech.dk’s participation is grounded on the stance that the future of technology development entails creating opportunities to bring different experiences, skills, and perspectives together.